ROFGO Junior drivers completed one of their most successful race weekends of the season so far in Spa-Francorchamps and Zandvoort respectively.

He started the weekend by setting the fastest time of the first practice session and qualified his ROFGO-liveried Team Motopark machine in pole position as the only driver to go under 2m11 on the 7 km long circuit.

In Saturday’s first race Oliver slipped back to second after the start but by the time they arrived at the Kemmel straight he already retained his lead and he never looked back. He immediately pulled away and after 14 laps he crossed the line to take his first win of the weekend with a 13-second advantage over his main championship rival.

Due to the reverse grid regulations, Oliver had to start the remaining two races from P6 on the grid but it didn’t seem to bother the ‘Great Dane’. He charged through the field and took the lead in a spectacular manner, and clinched a double victory, completing his first clean sweep of the season.

Besides the triple win, he maximized on the bonus points as well, scoring 82 points in total and extending his championship lead to 66 points with 15 races to go.

“A perfect weekend at one of my favourite tracks on the calendar. The car was amazing and even though Race 3 was more difficult than I expected, I still enjoyed the battles. Three wins, two fastest laps and the extra points for pole and most overtakes put me in a good position for the championship.”

Benjamin Goethe has proved once again that he is a force to be reckoned with at the third round of GT World Challenge Europe Sprint Cup in Zandvoort.

Goethe alongside Thomas Neubauer scored a double podium finish in the ROFGO-liveried WRT Audi at the Dutch GP circuit keeping themselves well in the game for Silver Cup honours as the season reached its halfway mark.

Thomas qualified the car for Saturday’s race, claiming P3 on the grid. After an unlucky start, having been caught up in the midfield traffic, he lost a few positions, slipping back to fifth in class. Benji took over the wheel at the halfway point and continued the recovery charge. He battled his way to P11 overall and P4 in class, just missing out on the last step of the podium while posting the fastest lap of the race. However, after the #99 Audi was hit with a post-race penalty, Benji and Thomas were promoted to P3, claiming their first Sprint Cup podium of the season.

It was Benji’s turn to set a time in Sunday’s qualy under difficult circumstances. The session started on a damp circuit, and soon after the rain has arrived. On top of that, Q2 was interrupted by a red flag with 2m45s left on the clock. Despite all the obstacles thrown his way, Benjamin managed to secure P6 for the second race of the weekend.

The young Dane got a great launch off the line and by the end of the first lap he already made up four positions, climbing all the way up to P3 in the Silver Cup classification. He continued his charge superbly, executing some stellar overtaking manoeuvres before passing the wheel to Thomas. The Frenchman finished the job, crossing the line in third place to secure the young duo’s second podium finish of the weekend.

“It’s been a pretty good weekend for us in Zandvoort and I am very happy with the double podium finish. The team did a great job with the car and we were very strong in both races. Let’s keep pushing for even more in Misano! “

“It fills me with great pride to see the progress of both Goethe boys. I’ve known them since they were little, and started working with them ten years ago. Oliver is thriving in the new environment. This car and team suits him perfectly which helped him to rise to a whole new level this season. He is dominating the championship, making big strides one race weekend at a time. Meanwhile Benji is growing into one of the best Silver rated GT drivers this season. He is consistent, fast and the results are proving that. He’s collecting one trophy after another in both Sprint and Endurance races.” 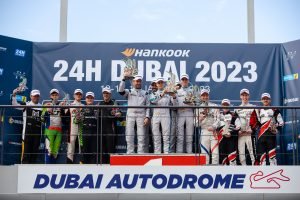 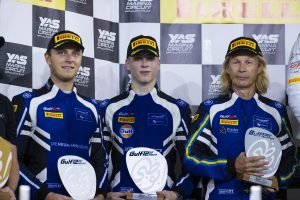